Home > Single Mums > Introducing Your Children to Your New Boyfriend

Introducing Your Children to Your New Boyfriend 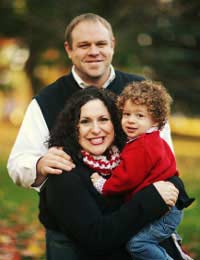 It’s the moment every single mum dreads, whether she is widowed, divorced, or never really had a partner. It’s the moment when she has to introduce her children to her new boyfriend, and it can be incredibly difficult.

For many single mums, a new dating relationship can be a source of both excitement and anxiety. Keep in mind, however, that not every new relationship needs to culminate in including the children. If you don’t envision a future with your new flame, you may want to keep the kids out of it.

Children are incredibly vulnerable when it comes to their parents dating again, and timing is critical. Not only do you want to make sure they are ready to accept someone else, but you want to make sure that new special someone is going to be around for a while, in case they get too attached and the new relationship doesn’t last.

In a perfect world, you shouldn’t introduce your children to your new boyfriend until they have become accustomed to the idea that you’re single. If your kids are still trying to adjust to your divorce, bringing a new man into the equation isn’t a good idea. If he was pivotal in the break-up of your relationship with their father, you’ll have to tread even more carefully.

Whipping out your new fella after the second date and inviting him accompany you on a family outing to the cinema might not be best practice either. Your children might think he’s great fun, and be gravely disappointed when you dump him after Date Five.

Here are some top tips to make the process that little bit easier, on you and the kids...

Avoiding a rocky start is important, which is why there are some things your new boyfriend can do to make sure everything gets off on the right foot. Warn your boyfriend not to:

If you and your new boyfriend or partner see a long-term future together, make sure you include your children in the planning. Even very young kids like to feel they are part of the process.

If you decide to move into a new place together, let your kids have a say about their own space. They can look at flats with you, have a role in decorating their new bedroom, help choose where furniture goes. Help them to feel they are an integral part of a family unit, not just something extra trailing behind your relationship.

Accepting that you have a new partner or boyfriend can be tricky for children, but if you approach things the right way you’ve won half the battle. With time, they’ll realize that you are not splitting your affections in half and that your love for them is unconditional, no matter who else enters the picture.

When Your Kids Don't Live With You

Relying on Friends and Family for Help

Advice and Entitlements for Lone Parents

Getting the Support You Need as a Single Mum