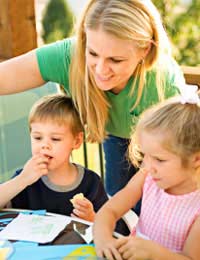 Let’s face it: not everyone likes the idea of sending a small child to nursery, and some people don’t feel comfortable having their child spend hours every week with a childminder, who might be looking after as many as four other children at the same time.

So if you’re a working mum who needs childcare – either before your child is of school age, or after he or she finishes school for the day before you come home from work – then a nanny might be your best choice.

Many people, however, cannot afford nannies, who traditionally charge more than either nurseries or childminders. In that case, a nanny share might work best for you – combining the best of both worlds, as it were.

A nanny share is when two families decide to share the services of one nanny. Usually that means that people with children roughly the same age hire a nanny to look after both children at the same time, at a place agreed on by both parents.

A nanny share works best when both sets of parents have the same values and philosophies when it comes to bringing up children, and when the children are compatible with each other and have a lot of the same activities and interests.

It goes without saying that a nanny share is also ideal when the parents have similar working hours, and can decide easily on a mutually advantageous place for the nanny to work.

A nanny share has many benefits, some of which include:

While having a nanny share may sound like the end to all your problems, there can be some disadvantages as well. They include:

One way to avoid many potential problems is to draw up a nanny share contract – both with your nanny, and with the other family. The contract should not only take care of basic issues such as salary, paid holiday leave and sickness, but also an exit strategy.

Remember, if one family is no longer interested in having a nanny share, the other family is left hanging. It’s best to decide beforehand what will happen in that eventuality, and have strict rules to follow so nobody gets left holding the baby.

Having a nanny share can be an amazing solution to a potentially difficult problem, or it can cause even more problems for already stressed-out parents.

Working mums need extra hassle less than other people, so make sure you only hire a registered, licensed nanny and work out all potential problems with the other family right from the start. Good luck!

Coping with School Holidays when you Work