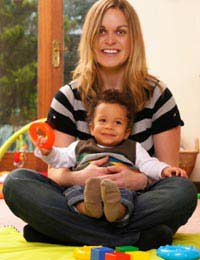 When Tracy Kidston needed a babysitter, she found the price prohibitively expensive. "All the nannies in my area charged £8 an hour, and there were no teenage girls nearby who I knew and trusted," she said.

"I have four children, and was desperate for a night out with my husband. But paying an extra £24 just for the babysitter, on top off a meal out or two cinema tickets and her taxi home, made it not worth the effort.

"Occasionally I'd manage to drag my sister over to spend the night with my kids, but that was rare. We live in London and she lives about an hour away, and it wasn't really fair on her."

Then Tracy started talking to a mum at her kid's school who was moaning about the same thing. "She and I started talking and found neither of us could really afford regular childcare. So we decided to set up a babysitting circle of mums, and occasionally dads, who wanted to trade babysitting.

"As they are also parents I trust them, and they all drive or live locally. I now do it two or three times a month and it's been brilliant. I get to go out, and when I babysit all I have to do is watch someone else's videos for a few hours, then go back home. It couldn't be easier."

Babysitting circles are brilliant for people who don't want to pay the price of a babysitter. They are usually suitable only for couples, as one person will have to stay home with your kids while the other looks after a friend's children.

Setting one up is easy. All you have to do is find a group of parents you trust, then get together and plan how you want it work. Some parents expand their NCT group or local playgroup into a babysitting circle; the advantage being that the children already know the parents involved.

Here are some ideas to get you started:

Setting up a babysitting circle is easy, and the advantages are many. You will save money on childcare, and your children will have babysitters they probably already know, and will hopefully look forward to their visits. You will have the added bonus of having a parent you trust look after your children.

Ask around at your local playgroup or school, or simply ask your local friends if they are interested in joining a babysitting circle with you. Once it gets up and running, it is easy to manage – and could revolutionise your social life!

"My husband and I were getting to the point where the only time we spent together was in front of the telly, and it was taking a huge toll on our relationship," recalls Tracy, whose babysitting circle has been up and running for almost two years now.

"Things are much better between us, now that we go out as a couple now and then. And I also get a girls' night out about once a month, which is fantastic!"

Coping with School Holidays when you Work