Working as a Single Mum: A Case Study 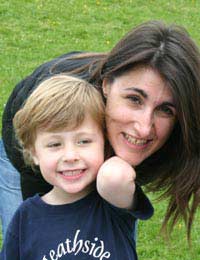 When Karen Beadle got pregnant with son Matthew, little did she know that in less than three years she'd be single again.

But Matthew is now a well-adjusted, happy eight-year-old, and Karen, a professional make-up artist, is a confident single mum running her own successful business.

“My job is pretty full-on but my priority is that no matter how career-orientated you are, no matter how much you love your work and how much money you make, your children should be your priority completely,” says Karen (karenbeadle.com).

Taking Nothing for Granted

Karen, who is in her forties, says that being a single mum means taking nothing for granted. “When I was sick recently, Matthew didn't believe me. He thought I was faking,” she says.

“He doesn't have someone telling him that Mummy is ill, and that he needs to be especially nice to me. And he doesn't understand the nature of giving to me as I am always giving to him."

“If I am not up doing things for him it's not right. It's learning the balance. You want to do everything for them, but when you can't they don't understand it. That's a hard thing for a parent as well.”

Karen is co-founder of bstylelondon.com, a make-up and wardrobe styling service. She works in cooperation with her friend Billie, a fashion stylist, and the two together provide professional make-up and styling advice, from skin care to cosmetics to clothing.

“We do everything, from the real top end to the bottom, " says Karen “We had a Russian woman looking recently for a Birkin bag, which costs about £20,000, and we also do teenagers embarking on life and women post-pregnancy who are looking for a new look, new direction.”

Part of the service is to help women throw out clothes they don't like anymore. “It's estimated that £2.4 billion worth of clothes are lying in women's wardrobes unworn in the UK,” Karen says.

Lipsticks are a barometer of the difficult times we're in, she says. “They have gone up in sales 40 percent since the recession started. If women can't afford a new wardrobe they invest in an expensive lipstick. If they cannot have what they want, they buy what they can afford.”

Full-Time at Work - and at Home

Although she loves her work, being her own boss has advantages and disadvantages: Karen can take time off when she needs to, but loses out financially when she does. And all the responsibility of bringing home the bacon – and frying it up in a pan – falls on her.

“I'm not interested in extended childcare. I try to pick him up from school myself, or he goes to after school-club and to friends' houses for sleepovers,” she says.

“I have a great network of great girlfriends who understand my point of view. Even if you are married the priority is still children and most women understand that."

“You should be pulling together with your girlfriends, married or not, everyone helps each other. Just because I'm a single parent does not make me different from other women, especially as women are almost always the primary carers anyway."

“The majority of women have to handle and juggle everything all the time. It will never change. It's the 21st century and it's still like that - both for single mums and mums who are in relationships.”

However, Karen is happy that Matthew has great male role models in his life. "My mother's partner has stepped in and filled a gap, and they get on famously," she says. "He has introduced Matthew to golf, and now he is one of the youngest - if not the youngest - player at our local club."

"Who knows, maybe I have a young Tiger Woods on my hands, and soon he'll be supporting me!"

I Went Freelance After My Second Child: A Case Study
Share Your Story, Join the Discussion or Seek Advice..
I so totally agree but modern life does not make it easy for single parents. I have shared custody with the father of my children. Our relationship is fairly amicable and he helps me out a lot as he is self employed. I have recently started an office job and I am feeling very frustrated because they won´t let me take time off to coincide with the children´s holiday as we are too busy at work. I feel torn between being a good mum and work. My children are now a little older, 12 and 10 but I still want to spend time with them. I am very aware that I have not got long before they are older and wiser and want to do their own thing without me.
malena - 4-Nov-12 @ 9:24 AM
Title:
(never shown)
Firstname:
(never shown)
Surname:
(never shown)
Email:
(never shown)
Nickname:
(shown)
Comment:
Validate: