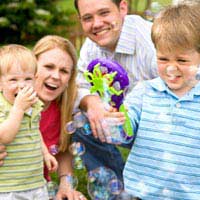 Chris Miller waited until he was almost 40 to become a dad, then had three sons in quick succession. After working as a television producer virtually all his working life, he was ready to give up some hours – and some pay – to spend more time with his kids.

“I approached the bosses about working term time only, as I knew that several women had already asked for – and got – permission to do so,” says Chris, now 49, who lives in central London.

“A man at my firm had never asked to work term time, as far as I knew. But there seemed to be a precedent already set, so I doubted they would say no.”

Chris was right, and he was granted permission to work only term time – the first man in his firm to do so. That means he now has two weeks off for Christmas, several weeks off for Easter, and six weeks off in the summer. He also has a week off every half-term.

Of course Chris took a pay cut, but not as much as you might think. “I actually fell into a different tax bracket, so I lost less of my salary than I anticipated,” Chris says.

“Also, as my wife Sara is a freelance accountant, she can work more when I am off, as I look after the kids. It means she is bringing in money she would not otherwise if she was looking after them full-time when they were off school, so it all evens out in the end.”

Chris still get paid 12 months every year, but he gets paid less. He and Sara, however, say that the fact they save on childcare costs during the school holidays also helps offset his smaller salary, as childcare can be prohibitively expensive, especially when only short-term.

In fact, Sara was more than pleased when Chris decided do term-time working – she was overjoyed. “We have three sons, and it can be hard having the children on your own when they're off school,” she says.

“And if I have an important client, it can be especially difficult to suddenly close up shop for six weeks, or look after the kids all day and then try to catch up with work in the evenings.

“The best bit, though, is that we get to spend a lot of family time together. Even thought we lose out on money, we make up for it by doing so much with the boys.”

Adds Chris: “It has been really important for me to watch my boys grow up. I miss a lot of school concerts and things like that because I am at work, but I make up for it in the summer and during the other holidays.”

Every summer, the Miller family now spends at least four weeks travelling, even if it's just camping around the UK, or staying with friends in different towns.

“Most of my friends who don't work spend the summer with the kids but without their partners. If they do work, they rely on childcare over the summer and take just two weeks off,” Sara says.

“When they finally do go on holiday, usually there is an enormous expectation that everything is absolutely perfect, and it puts huge pressure on everyone. Chris and I used to have big rows during our one big holiday of the year, but now everything is different.

“We are in the position where we can just relax and chill out, and not have to worry so much like some of our friends do.”

The only downside, Chris says, is that he sometimes misses out on interesting work trips abroad, because they take place when he is home with the kids. “Last year, for the first time, I actually gave up one of my term time weeks to travel abroad for work. It was a story that I really wanted to cover, and Sara didn't mind, so I went ahead with it.

“I was able to take a week off in lieu at a later date, and since the kids were already back at school, I spent a week doing some necessary DUI on the house.

“If you have a sympathetic boss, working term time really can be the best of both worlds. I'm really glad I took the plunge, as it has made a big difference to me, my wife and to our sons. Our quality of life is so much better now that it used to be, even if we do have less money.”

What Are Staggered and Compressed Hours?