Home > Case Studies > Setting Up Your Own Business: A Case Study

Setting Up Your Own Business: A Case Study 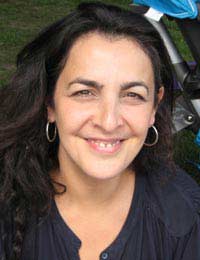 When Ronit Conforti-Brinkmann set up her own architectural firm, it wasn't because she wanted the flexibility that being her own boss would give her and her children. In fact, Ronit had no kids at the time.

But Ronit, 43, now has two sons – Coco, six, and one-year-old Anton – and she is very appreciative of the freedom that setting up her own business has afforded her ever since she started out on her own almost a decade ago.

“It's about doing your own design, your own work, and also being a mother. I'm almost like a full-time mother, even thought I work full-time,” says Ronit.

Working on Her Own

Ronit employs two other architects, and they work together from an office in her home. “It's true the baby has a nanny. But when I have a lunch break I can spend time with him, and I am always aware of what she is doing with him,” she says

“I can see what she does with him and I hear them all the time. I always have the feeling that I am there for him – all the time.”

Her six-year-old experiences “only in a very minor way” the fact that she is a working mum, she says. “The hours I work fully are when he is in school, and I can drop him off and pick him up whenever I want, within reason,” she says.

“On Fridays I always dedicate the whole afternoon to him, I pick him up and we go swimming together. And during the week after five I always cook him dinner and we read together, and after he is bed I continue with my working day.”

Freedom to Spend More Time with the Kids

Ronit says that the freedom her own business affords her has helped cement her relationship with both her kids, something she wouldn't give up for the world.

“It means I have a very different relationship with my children than I would if I worked in a large office," says Ronit, who originally is from Israel but now lives in London with her German husband Raymond.

"I'm not the parent who sees them over the weekend. I have the chance to be more involved, and I am.”

She is the first to admit, however, that everything is not always perfect. “Working from home is not the ideal as it means I sometimes suffer from the odd disturbance from the kids, but there are ways to minimise that,” she says.

“You can set up an office that only has outside access, for example, so that they cannot come in and out as they please. It may not be ideal, but it can work.”

Better than a Large Office

Ronit worked in a large firm in Israel for four years before moving to the UK, so she knows from firsthand experience what that type of job entails. “When I had the opportunity to open a practice with two friends with whom I had studied, I jumped at it,” she says.

“As an architect it's often like you have two bosses, your own boss and the client. Being on my own means not only that I'm my own boss but it also means having more control of my time, as well as the way the work is distributed.

“And it also gives me a lot more freedom – in so many ways. When you become a mother and have other responsibilities, the way work is distributed becomes very important.

"By setting up my own business I have a lot of say in the distribution of work and clients, and it makes things a lot easier - and happier - for everyone.

"Maybe if I was a partner in a big firm things would also be this good, but I like everything the way it is for the moment. And I don't always have to work until 2am, which I remember doing a lot when I worked in a large office!”